The previous website worked just fine for a long time, and Sherry, not one to mess with what isn't broken, probably wouldn't have bothered with an update, if she didn't have a young adult fantasy coming out in the fall of 2013, which kind of mandated an overhaul of the website, not so much to segregate the different genres she writes, but to make it easier for readers to reach their intended destinations.

Of course she turned to Frauke of Croco Designs again, who came up with a breathtaking design and so much good coding besides. Sherry will be having fun with this website for years to come.

(And in case anyone has read the stories behind earlier incarnations of this website, Sherry does have an iPod now—an iPod Touch her husband won as a prize at work. It sat in her nightstand drawer for almost two years before she decided to take it for a test drive and now she uses it to listen to audiobooks and podcasts when she does housework—or, on the infrequent occasion, exercises. She also uses it to cheat on her offline writing time to peek quickly at incoming emails—though thank goodness she is still too old-fashioned to want to tap out long replies on it. And as for her current phone, it takes pictures, but is still a dinosaur otherwise. When she travels and cannot find wifi for her laptop, she considers investing in a smartphone. Then she comes home and forgets all about it.) 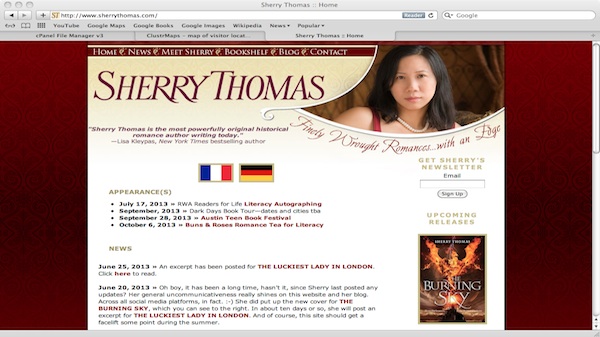 Sherry’s second website was based on a php template designed and implemented by Frauke Spanuth of Croco Designs.

The first website had graphics supplied by Croco Designs and a template jerry-rigged by Sherry herself. Everything done by Frauke was beautiful, but not everything done by Sherry was beautiful! :-) For one thing, since Sherry learned html and CSS from a book that prided itself on not using tables, she didn't know how to use tables, and the footer menu, for example, was never centered properly.

And of course there was always the fear that html sites might become a thing of the past. Sherry isn’t at all hip where web innovations are concerned, but she didn’t want to be particularly old-fashioned either, when it came to her website.

Frauke recommended a wordpress template. But Sherry remained hesitant about using wordpress for her website. They settled on upgrading the website to a php site. Frauke’s designs were absolutely gorgeous, as usual. Sherry was originally going to try to implement the new php template herself. But one brief attempt was enough to convince her that she did not want to learn php. The task of implementation was better left to professionals—like Frauke—and Sherry’s own time was better spent writing!

And that was how this new version of her website came to be. Sherry still did the maintenance and updating herself, careful never to step on any php code. But except for the usual site launch craziness, this website upgrade had been easy as pie—for Sherry, that is. Frauke might have a different story to tell. :-) 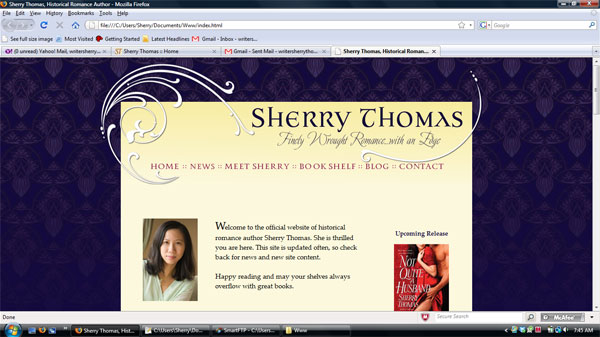 Sherry is ridiculously proud to say that she handcoded this website herself. She is not, in general, a very savvy person in such matters—she is still on her very first cell phone, which doesn’t take picture or play music, and she doesn’t own an ipod—but she wanted creative control and all other kinds of control over her website, so she decided to give it a try.

Between the second and third rewrites of DELICIOUS, she surfed around these internets and, with a simple google search for “html tutorials,” found the marvelous site that is HTMLSource. While following the tutorials, she came across an ardent recommendation for a CSS book named HTML Utopia: Designing without Tables USing CSS. CSS, short for cascading style sheet, is a clean, efficient way to write HTML code that separate the content from the presentation. She checked out a four-chapter preview of the book, and the latent geek in her found it extremely interesting reading.

Then her editor called, much work was still needed on DELICIOUS. So she went back to revisions, but not before she had contacted the enormously talented Frauke Spanuth of Croco Designs, who had designed her promotional bookmarks, to come up with the look of the website. Being entirely ignorant, she didn’t realize that what she wanted was a web template, so she asked for graphics instead. Frauke did the graphics and very kindly put up a mock-up for Sherry to see.

Sherry was instantly thrilled. The mock-up was so beautiful, it was exactly what she wanted. So when she handed in her third rewrite, she immediately dove into building the website—and found she’d landed herself in the deep end of the pool. The graphics came in separate files, and without a proper graphic editor program, it took her a longtime to assemble the graphics so that they wouldn’t end up all over the screen. But the CSS book, which she purchased as a pdf file, turned out to be a godsend. Following its directions on building a simple website, and with an occasional trip to HTMLSource to refresh her knowledge of the basics of HTML, she managed, after a great deal of trial-and-error, to come up with a template of her own.

Special thanks must be given to Frauke, for her saintly patience, for when Sherry would e-mail her in panic and ask for the Hex codes of background colors because she couldn’t match them herself, and to Michelle McGinnis, for explaining exactly what FTP is and reassembling the masthead graphics for Sherry when her attempts at their assembly in MS Paint resulted in an opaque canvas that wouldn’t show the beautiful lotus-vase background behind.

And then Sherry discovered graphic elements to be had for a few dollars on istockphoto.com and canstockphoto.com. She browsed through thousands of images with the glee and greed of a young man given his own harem. In the end she only purchased a set of scroll dividers and a page of small accents. And with an incredibly old Fireworks 3 graphic editor that she’d acquired, she managed to edit them and use them to add bits of visual interest to the website.

All in all, it has been a terrific experience. She loved learning CSS and figuring out how to do things in HTML and Fireworks. Who knows? Maybe she’ll invest in Photoshop next. Or maybe she’ll give in to her mother's entreaties and finally get a new phone instead.

Edited to add: The site works fine in IE6 and IE7. There are some slight quirks and oddities that Sherry has yet to work out with Firefox. And although she’d never heard of Safari or Opera before she started studying CSS, she’s determined that this website will look and work great in every browser. Someday.

This is where Sherry gives a friendly warning that everything on this website belongs to her. Please do not use the words that are her blood, sweat, and tears in ways you shouldn’t. And for graphic content, please either contact Frauke for a fabulous and fabulously economical design or go hog wild at a fine royalty-free stock image site.